Aquaporin 5 interacts with fluoride and possibly protects against caries 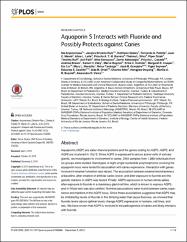 Aquaporins (AQP) are water channel proteins and the genes coding for AQP2, AQP5, and AQP6 are clustered in 12q13. Since AQP5 is expressed in serous acinar cells of salivary glands, we investigated its involvement in caries. DNA samples from 1,383 individuals from six groups were studied. Genotypes of eight single nucleotide polymorphisms covering the aquaporin locus were tested for association with caries experience. Interaction with genes involved in enamel formation was tested. The association between enamel microhardness at baseline, after creation of artificial caries lesion, and after exposure to fluoride and the genetic markers in AQP5 was tested. Finally, AQP5 expression in human whole saliva, after exposure to fluoride in a mammary gland cell line, which is known to express AQP5, and in Wistar rats was also verified. Nominal associations were found between caries experience and markers in the AQP5 locus. Since these associations suggested that AQP5 may be inhibited by levels of fluoride in the drinking water that cause fluorosis, we showed that fluoride levels above optimal levels change AQP5 expression in humans, cell lines, and rats. We have shown that AQP5 is involved in the pathogenesis of caries and likely interacts with fluoride.

The following license files are associated with this item: