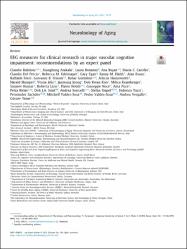 Vascular contribution to cognitive impairment (VCI) and dementia is related to etiologies that may affect the neurophysiological mechanisms regulating brain arousal and generating electroencephalographic (EEG) activity. A multidisciplinary expert panel reviewed the clinical literature and reached consensus about the EEG measures consistently found as abnormal in VCI patients with dementia. As compared to cognitively unimpaired individuals, those VCI patients showed (1) smaller amplitude of resting state alpha (8–12 Hz) rhythms dominant in posterior regions; (2) widespread increases in amplitude of delta (< 4 Hz) and theta (4–8 Hz) rhythms; and (3) delayed N200/P300 peak latencies in averaged event-related potentials, especially during the detection of auditory rare target stimuli requiring participants’ responses in “oddball” paradigms. The expert panel formulated the following recommendations: (1) the above EEG measures are not specific for VCI and should not be used for its diagnosis; (2) they may be considered as “neural synchronization” biomarkers to enlighten the relationships between features of the VCI-related cerebrovascular lesions and abnormalities in neurophysiological brain mechanisms; and (3) they may be tested in future clinical trials as prognostic biomarkers and endpoints of interventions aimed at normalizing background brain excitability and vigilance in wakefulness.