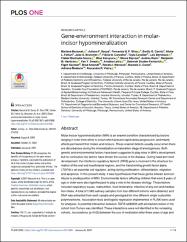 Molar incisor hypomineralization (MIH) is an enamel condition characterized by lesions ranging in color from white to brown which present rapid caries progression, and mainly affects permanent first molars and incisors. These enamel defects usually occur when there are disturbances during the mineralization or maturation stage of amelogenesis. Both genetic and environmental factors have been suggested to play roles in MIH’s development, but no conclusive risk factors have shown the source of the disease. During head and neck development, the interferon regulatory factor 6 (IRF6) gene is involved in the structure formation of the oral and maxillofacial regions, and the transforming growth factor alpha (TGFA) is an essential cell regulator, acting during proliferation, differentiation, migration and apoptosis. In this present study, it was hypothesized that these genes interact and contribute to predisposition of MIH. Environmental factors affecting children that were 3 years of age or older were also hypothesized to play a role in the disease etiology. Those factors included respiratory issues, malnutrition, food intolerance, infection of any sort and medication intake. A total of 1,065 salivary samples from four different cohorts were obtained, and DNA was extracted from each sample and genotyped for nine different single nucleotide polymorphisms. Association tests and logistic regression implemented in PLINK were used for analyses. A potential interaction between TGFA rs930655 with all markers tested in the cohort from Turkey was identified. These interactions were not identified in the remaining cohorts. Associations (p<0.05) between the use of medication after three years of age and MIH were also found, suggesting that conditions acquired at the age children start to socialize might contribute to the development of MIH.