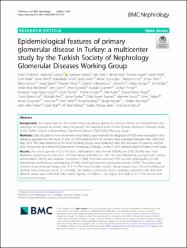 Background The largest data on the epidemiology of primary glomerular diseases (PGDs) are obtained from the databases of countries or centers. Here, we present the extended results of the Primary Glomerular Diseases Study of the Turkish Society of Nephrology Glomerular Diseases (TSN-GOLD) Working Group. Methods Data of patients who underwent renal biopsy and received the diagnosis of PGD were recorded in the database prepared for the study. A total of 4399 patients from 47 centers were evaluated between May 2009 and May 2019. The data obtained at the time of kidney biopsy were analyzed. After the exclusion of patients without light microscopy and immunofluorescence microscopy findings, a total of 3875 patients were included in the study. Results The mean age was 41.5 +/- 14.9 years. 1690 patients were female (43.6%) and 2185 (56.3%) were male. Nephrotic syndrome was the most common biopsy indication (51.7%). This was followed by asymptomatic urinary abnormalities (18.3%) and nephritic syndrome (17.8%). The most common PGD was IgA nephropathy (25.7%) followed by membranous nephropathy (25.6%) and focal segmental glomerulosclerosis (21.9%). The mean total number of glomeruli per biopsy was 17 +/- 10. The mean baseline systolic blood pressure was 130 +/- 20 mmHg and diastolic blood pressure was 81 +/- 12 mmHg. The median proteinuria, serum creatinine, estimated GFR, and mean albumin values were 3300 (IQR: 1467-6307) mg/day, 1.0 (IQR: 0.7-1.6) mg/dL, 82.9 (IQR: 47.0-113.0) mL/min and 3.2 +/- 0.9 g/dL, respectively. Conclusions The distribution of PGDs in Turkey has become similar to that in other European countries. IgA nephropathy diagnosed via renal biopsy has become more prevalent compared to membranous nephropathy.