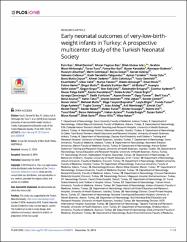 Objective To investigate the early neonatal outcomes of very-low-birth-weight (VLBW) infants discharged home from neonatal intensive care units (NICUs) in Turkey. Material and methods A prospective cohort study was performed between April 1, 2016 and April 30, 2017. The study included VLBW infants admitted to level III NICUs. Perinatal and neonatal data of all infants born with a birth weight of ≤1500 g were collected for infants who survived. Results Data from 69 NICUs were obtained. The mean birth weight and gestational age were 1137 ±245 g and 29±2.4 weeks, respectively. During the study period, 78% of VLBW infants survived to discharge and 48% of survived infants had no major neonatal morbidity. VLBW infants who survived were evaluated in terms of major morbidities: Bronchopulmonarydysplasia was detected in 23.7% of infants, necrotizing enterocolitis in 9.1%, blood culture proven late-onset sepsis (LOS) in 21.1%, blood culture negative LOS in 21.3%, severe intraventricular hemorrhage in 5.4% and severe retinopathy of prematurity in 11.1%. Hemodynamically significant patent ductus arteriosus was diagnosed in 24.8% of infants. Antenatal steroids were administered to 42.9% of mothers. Conclusion The present investigation is the first multicenter study to include epidemiological information on VLBW infants in Turkey. Morbidity rate in VLBW infants is a serious concern and higher than those in developed countries. Implementation of oxygen therapy with appropriate monitoring, better antenatal and neonatal care and control of sepsis may reduce the prevalence of neonatal morbidities. Therefore, monitoring standards of neonatal care and implementing quality improvement projects across the country are essential for improving neonatal outcomes in Turkish NICUs.

The following license files are associated with this item: