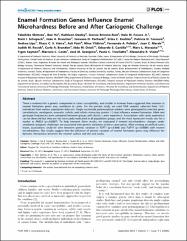 There is evidence for a genetic component in caries susceptibility, and studies in humans have suggested that variation in enamel formation genes may contribute to caries. For the present study, we used DNA samples collected from 1,831 individuals from various population data sets. Single nucleotide polymorphism markers were genotyped in selected genes (ameloblastin, amelogenin, enamelin, tuftelin, and tuftelin interacting protein 11) that influence enamel formation. Allele and genotype frequencies were compared between groups with distinct caries experience. Associations with caries experience can be detected but they are not necessarily replicated in all population groups and the most expressive results was for a marker in AMELX (p = 0.0007). To help interpret these results, we evaluated if enamel microhardness changes under simulated cariogenic challenges are associated with genetic variations in these same genes. After creating an artificial caries lesion, associations could be seen between genetic variation in TUFT1 (p = 0.006) and TUIP11 (p = 0.0006) with enamel microhardness. Our results suggest that the influence of genetic variation of enamel formation genes may influence the dynamic interactions between the enamel surface and the oral cavity.