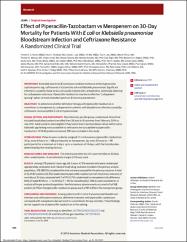 IMPORTANCE Extended-spectrum beta-lactamases mediate resistance to third-generation cephalosporins (eg, ceftriaxone) in Escherichia coli and Klebsiella pneumoniae. Significant infections caused by these strains are usually treated with carbapenems, potentially selecting for carbapenem resistance. Piperacillin-tazobactam may be an effective "carbapenem-sparing" option to treat extended-spectrum beta-lactamase producers. OBJECTIVES To determine whether definitive therapy with piperacillin-tazobactam is noninferior to meropenem (a carbapenem) in patients with bloodstream infection caused by ceftriaxone-nonsusceptible E coli or K pneumoniae. DESIGN, SETTING, AND PARTICIPANTS Noninferiority, parallel group, randomized clinical trial included hospitalized patients enrolled from 26 sites in 9 countries from February 2014 to July 2017. Adult patients were eligible if they had at least 1 positive blood culture with E coli or Klebsiella spp testing nonsusceptible to ceftriaxone but susceptible to piperacillin-tazobactam. Of 1646 patients screened, 391 were included in the study. INTERVENTIONS Patients were randomly assigned 1: 1 to intravenous piperacillin-tazobactam, 4.5 g, every 6 hours (n = 188 participants) or meropenem, 1 g, every 8 hours (n = 191 participants) for a minimum of 4 days, up to a maximum of 14 days, with the total duration determined by the treating clinician. MAIN OUTCOMES AND MEASURES The primary outcome was all-cause mortality at 30 days after randomization. A noninferiority margin of 5% was used. RESULTS Among 379 patients (mean age, 66.5 years; 47.8% women) who were randomized appropriately, received at least 1 dose of study drug, and were included in the primary analysis population, 378 (99.7%) completed the trial and were assessed for the primary outcome. A total of 23 of 187 patients (12.3%) randomized to piperacillin-tazobactam met the primary outcome of mortality at 30 days compared with 7 of 191 (3.7%) randomized to meropenem (risk difference, 8.6%[1-sided 97.5% CI, -infinity to 14.5%]; P = .90 for noninferiority). Effects were consistent in an analysis of the per-protocol population. Nonfatal serious adverse events occurred in 5 of 188 patients (2.7%) in the piperacillin-tazobactam group and 3 of 191 (1.6%) in the meropenem group. CONCLUSIONS AND RELEVANCE Among patients with E coli or K pneumoniae bloodstream infection and ceftriaxone resistance, definitive treatment with piperacillin-tazobactam compared with meropenem did not result in a noninferior 30-day mortality. These findings do not support use of piperacillin-tazobactam in this setting.