Acute flaccid myelitis outbreak through 2016-2018: A multicenter experience from Turkey 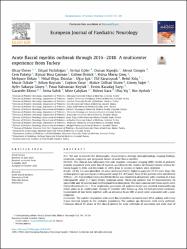 Aim: We aim to describe the demographic characteristics, etiology, neurophysiology, imaging findings, treatment, prognosis, and prognostic factors of acute flaccid myelitis. Methods: The clinical data, laboratory test and, magnetic resonance imaging (MRI) results of pediatric patients diagnosed with acute flaccid myelitis according to the Centers for Disease Control criteria between August 1, 2016, and December 31, 2018, from 13 centers in Turkey were reviewed. Results: Of the 34 cases identified, 31 were confirmed (91.2%). Eighteen patients (55.9%) were boys. The median patient age was 4 years (interquartile range 2.5–6.9 years). Most of the patients were admitted in 2018 (n = 27). A preceding history of a febrile illness was reported in all patients, with a median of 4 days (interquartile range 3–7 days) before symptom onset. Thirty-one patients had T2 hyperintensity on spinal MRI, and 18 patients had cerebrospinal fluid pleocytosis. The most common infectious agents were entero/rhinoviruses (n = 5) in respiratory specimens. All patients except one received immunotherapy either alone or in combination. Among 27 patients with follow-up data 24 had persistent weakness. Involvement of four limbs together with an abnormal brain MRI at onset were associated with a poor prognosis. Conclusion: The number of patients with acute flaccid myelitis increased since 2012, spiking with every 2-year interval, largely in the pediatric population. The median age decreases with every outbreak. Clinicians should be aware of the clinical picture for early collection of specimens and early start of rehabilitation programs. Further studies are needed to better characterize the etiology, pathogenesis, risk factors, and treatment of this rare condition.