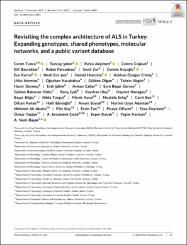 The last decade has proven that amyotrophic lateral sclerosis (ALS) is clinically and genetically heterogeneous, and that the genetic component in sporadic cases might be stronger than expected. This study investigates 1,200 patients to revisit ALS in the ethnically heterogeneous yet inbred Turkish population. Familial ALS (fALS) accounts for 20% of our cases. The rates of consanguinity are 30% in fALS and 23% in sporadic ALS (sALS). Major ALS genes explained the disease cause in only 35% of fALS, as compared with similar to 70% in Europe and North America. Whole exome sequencing resulted in a discovery rate of 42% (53/127). Whole genome analyses in 623 sALS cases and 142 population controls, sequenced within Project MinE, revealed well-established fALS gene variants, solidifying the concept of incomplete penetrance in ALS. Genome-wide association studies (GWAS) with whole genome sequencing data did not indicate a new risk locus. Coupling GWAS with a coexpression network of disease-associated candidates, points to a significant enrichment for cell cycle- and division-related genes. Within this network, literature text-mining highlightsDECR1, ATL1, HDAC2, GEMIN4, andHNRNPA3as important genes. Finally, information on ALS-related gene variants in the Turkish cohort sequenced within Project MinE was compiled in the GeNDAL variant browser (www.gendal.org).