Origin and spread of human mitochondrial DNA haplogroup U7 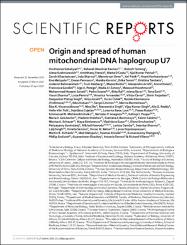 Human mitochondrial DNA haplogroup U is among the initial maternal founders in Southwest Asia and Europe and one that best indicates matrilineal genetic continuity between late Pleistocene huntergatherer groups and present-day populations of Europe. While most haplogroup U subclades are older than 30 thousand years, the comparatively recent coalescence time of the extant variation of haplogroup U7 (-16-19 thousand years ago) suggests that its current distribution is the consequence of more recent dispersal events, despite its wide geographical range across Europe, the Near East and South Asia. Here we report 267 new U7 mitogenomes that -analysed alongside 100 published ones -enable us to discern at least two distinct temporal phases of dispersal, both of which most likely emanated from the Near East. The earlier one began prior to the Holocene (-11.5 thousand years ago) towards South Asia, while the later dispersal took place more recently towards Mediterranean Europe during the Neolithic (-8 thousand years ago). These findings imply that the carriers of haplogroup U7 spread to South Asia and Europe before the suggested Bronze Age expansion of Indo-European languages from the Pontic-Caspian Steppe region.