Positioning Europe for the epitranscriptomics challenge 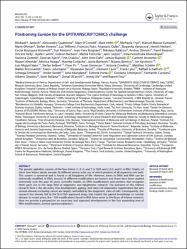 The genetic alphabet consists of the four letters: C, A, G, and T in DNA and C,A,G, and U in RNA. Triplets of these four letters jointly encode 20 different amino acids out of which proteins of all organisms are built. This system is universal and is found in all kingdoms of life. However, bases in DNA and RNA can be chemically modified. In DNA, around 10 different modifications are known, and those have been studied intensively over the past 20years. Scientific studies on DNA modifications and proteins that recognize them gave rise to the large field of epigenetic and epigenomic research. The outcome of this intense research field is the discovery that development, ageing, and stem-cell dependent regeneration but also several diseases including cancer are largely controlled by the epigenetic state of cells. Consequently, this research has already led to the first FDA approved drugs that exploit the gained knowledge to combat disease. In recent years, the similar to 150 modifications found in RNA have come to the focus of intense research. Here we provide a perspective on necessary and expected developments in the fast expanding area of RNA modifications, termed epitranscriptomics.