Abnormalities of resting-state functional cortical connectivity in patients with dementia due to alzheimer's and lewy body diseases: An EEG study 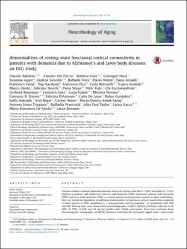